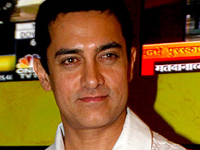 The perfectionist – Aamir Khan has never screamed from the roof tops that he is the star who rules Bollywood. Yet we knew that over the years he has gone one step ahead of his contemporaries and his films have turned out to be most anticipated ones.

Now what has been slowly and silently evolving for a long time has been officially recognised. Aamir has gained the top slot in the new power list of Bollywood that has been brought out by Filmfare.

‘Taare Zammen Par’ proved his ability to excel beyond acting and ‘Ghajini’ became the first Rs 1 billion project was the decisive weapon that Aamir used to prove himself to be a mass hero. This mega hit’s overwhelming success is surely the reason for the top slot coming Aamir’s way!

None other than the ravishing Kareena Kapoor, the only heroine who has found her way into the list. With or without awards and blockbusters the endorsement queen of B-Town has a certain aura that always surrounds her.