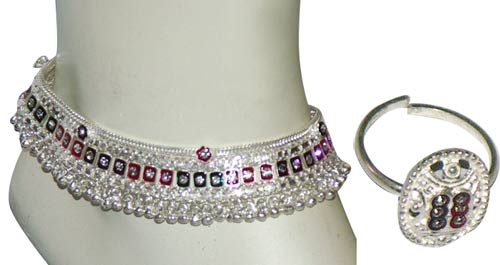 Popular and greatly favored amongst younger women, the anklet or ankle bracelet and toe rings have become coveted bridal accessories in the Sub-continent and the Middle East.

Historically speaking, anklets made with copper, gold and silver, as well as leather strips embellished with rhinestones were used for centuries by ancient Egyptians, Aztecs and Roman civilizations. Copper was used primarily for medicinal purpose, as it was believed (and that belief still exists), that copper helps to ease inflammation of the joints. This ancient tradition gradually infiltrated the Middle East and South Asian regions, expanding rapidly to Europe.

Modern day fashion jewelry rose to prominence in the early 20th century (1920 – 1930), when a group of French Jewelry Designers, revolutionized the concept of turning the conventional designs to make new, bold and trendy fashion accessories.

The craze to wear anklets or commonly known as ‘payal or pazaib’ started with a single chain made with gold or silver, or multi-coloured beads or seashells threaded in a string; focus on foot ornaments started some three to four decades back, when glamorous fashion magazines and movies portrayed models and celebrities, wearing trendy ‘hip’ anklets and toe rings, which soon became the rage in the world of fashion accessories.

Today, most bridal ensembles in South Asian and Middle Eastern countries are incomplete without the ethnic payal with ghungurus

1 thought on “Ankle and toe accessories for Bridal wear”