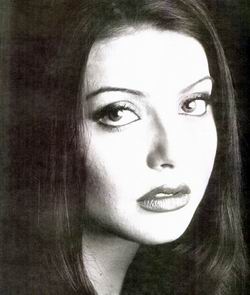 Whether you know her as Nida Pasha or Nida Yasir, there is no denying that this young starlet has made a name for herself not because of her illustrious show biz background but by dint of her own talent and hard work. Fashion Collection chats with her about her transition from a budding TV artiste during her carefree days as a single woman to her present position of celebrity married to a colleague.

Do you feel being Kazim Pasha’s daughter facilitated you in joining the acting profession?

I hardly think so. I had never thought of acting, but my friends were after me that I am photogenic and should try my luck in plays. So, I finally took part in one directed by my father, in which I had just two scenes where all I was expected to do was cry. My father was quite impressed with my crying abilities, but didn’t want me to pursue a career at that point as I was still studying. After I graduated he caste me in another play, ‘Daji’ but after that he gave me no more breaks as he felt people would think he was promoting me. He wanted me to make a name for myself on my own merit, without his support. It did bother me initially, especially because I know he gives other girls such opportunities that they become famous after a serial, where as I had to make it on my own. So it was more a disadvantage having parents in showbiz. It was only after I worked with Yasir Akhter in ‘Mera ghar aik whirlpool’ that I gained recognition and after that got a lot of offers for commercials and dramas. I started comparing and modeling too, after that. more
Did you catwalk modeling as well?

I did a few shows-nothing spectacular-but frankly am not fond of modeling. I feel you do nothing in it except expose yourself. I was given a lot of offers by English magazines for shoots but since my father wouldn’t allow me to wear sleeveless, there were hardly any outfits that I could model. So, I only modeled for those magazines in which I was allowed to dress respectably, without exposing any part of any anatomy.

Had a secret romance been brewing while you and Yasir starred together in plays?

Actually, no. Yasir and I had never worked together almost till the time he proposed to me, and the one serial in which we had both starred, our entries were such that when I would be on location he was not required, and when he was on location, I was not in the scene. Then, prior to our engagement, we worked together in one play, which was funnily enough, called ‘Mohabbat’, and Yasir apparently felt I’d be the right wife for him, so proposed. I had never thought of him as a prospective husband, though, and had left decisions about my marriage on my parents.

How did Yasir propose to you?

It was highly unromantic! There was no ambiance or formalities. He was dropping me home one day after work, and very casually mentioned that he’d be sending his parents over. I was puzzled, and when I asked why, he informed me that they’d be bringing a ‘rishta’. I had no whiff of it and was really shocked.

What was your family’s reaction?

My parents are very cool and I have a relaxed relationship with them. But, I refused Yasir initially, because I felt we hailed from two different cultural backgrounds-my father is Urdu speaking and Yasir’s family is Sindhi. I had been brought up in a liberal atmosphere and thought I might not be able to adjust to their family. So, I told Yasir we’d continue to be colleagues and friends, but he should forget about anything beyond that. However, Yasir was not comfortable acting with me after that and strangely enough, I began to develop feelings for him. Also, Yasir’s mother called and assured my family that we didn’t need to fear about cultural differences, as they were more similar in their ways than we thought.

My father made enquiries about them and after satisfying himself, agreed to the engagement. We got married after two years.

How come the long gap?

Yasir’s brother got married first, and in any case we wanted to get to know each other and our families better, so had decided to wait for a year. But later, Yasir’s father passed away so we extended the date further.

Do you feel there’s any change in your relationship since you got married?

Isn’t there always? I was mentally prepared that he would change once we were married. All men do. During the days we were engaged, if I’d call him up to tell him that I was free and ask him where he was, even if he was at the other end of the earth, he’d come to pick me up. Now, I wouldn’t dare call, for I know he’ll never have the time! It’s nothing unusual-men become more relaxed after marriage and invariably begin to take their wives for granted.

Why is it that you aren’t acting opposite each other any more?

Well, from the time we got engaged, directors started taking it for granted that we would work together so would cast us together in their plays. But after we got married, Yasir got fed-up of the monotony and was irritated by the fact that he had to land up with me in every play, although I was quite happy to be working with my husband. He told everyone that that if they want to cast either of us it would have to be without the other.

Doesn’t he mind you acting with other heroes?

He doesn’t say anything, but one thing is for sure- he doesn’t watch my plays with other heroes these days. Previously, he used to watch them and offer criticism, but not any more. He would be only too happy if I quit work, and he could take care of me! But, I feel it is essential for a woman to work – it gives them an incentive to be groomed and well maintained. I do feel though, that I got married at a time when my career was just growing and I had made a name for myself and could have gone places. Marriage, however, restricts you because you become time bound and can’t avail of all the opportunities that come your way to prove your mettle.

So how are you coping with maintaining a career and yet not setting your husband’s backup?

I’ve taken to compering shows. It’s less time consuming and brings you recognition. You remain in the loop, and I feel people become more familiar with your name than when you are acting, for people remember you more by the name of the character you are portraying than by your own. But, acting is my first love, and my son is a little older and my responsibilities become less, I’ll go back to plays.

What are you comparing currently?

It’s an interesting programme for Hum TV, called ‘Angan’. It’s a home show designed for women in which there are four segments, including one in which household tips are provided.