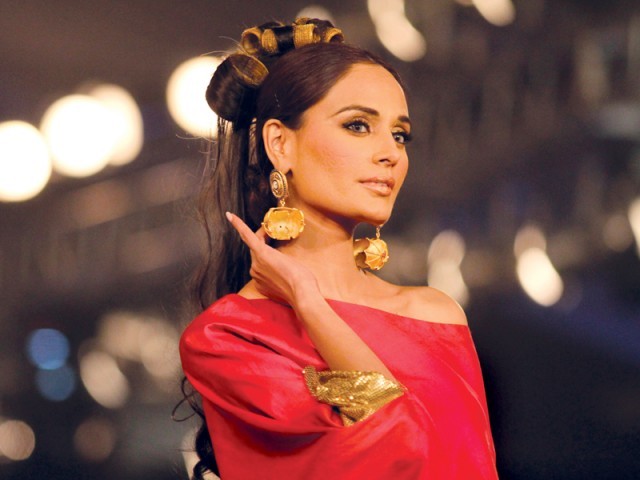 If the first day of the bridal week is anything to go by, one expects the entire event to be peppered with ‘statement’ shows which seek to obliterate the old and create new trends, keeping up with the postmodern life.

Tightly-structured, thought-provoking and visually appeasing, this unique consonance of fashion and beauty may just prove to be worth it for every bride. Although, day one lacked the glitz and glamour that one expects from a bridal week, simple measures, like an informative ‘Inside Bridal Week’ daily newsletter with make-up tips from the stylist of the day, are proof enough that the PFDC L’Oreal Paris Bridal Week (PLBW) has all the elements to be ‘the’ bridal showcase in the country.

There’ll always be great expectations of the king of couture whenever he exhibits and although Hassan Sheheryar Yasin’s show comes off conceptually strong, with some brilliant couture pieces, his work seems misplaced. The theme, ‘Game of Kings’, to pay tribute to polo, was a novel idea but belonged more to a fashion week showing than a bridal week presentation. “Polo is a lifestyle afforded by a select few. It’s as glamorous as HSY, the design house,” defended Yasin. The brand, HSY, is renowned for its unapologetic, traditional opulence which Yasin showed glimpses of with a sari and a heavily worked miniskirt cum lengha, but ultimately, the collection felt at odds with the theme that one associates with a subcontinental wedding.

However, the men’s wear, with its open sherwanis and long coats, was grand and befitting any groom. “We are too settled in what we feel should be a bridal showcase. We aren’t willing to push those boundaries,” said Yasin. “My show was what every show should be: thrilling and conceptual enough to make people rethink.”

“The name Nabila is synonymous to change,” said the lady herself. And true to this statement, Nabila, one of the leading stylists in Pakistan, teamed up with Zaheer Abbas for his first bridal showcase. The presentation was slick, smooth and true to Nabila’s concept of dramatic change that was executed in 10 seconds flat. A bride would walk in her traditional ensemble, walk behind the Nabila cubicle and emerge a sexy and hip starlet. “I was the pioneer in introducing image makeovers and then the whole industry caught on to rendering dramatic change through hair,” stated Nabila. With Abbas’ minimalistic bridal wear, which focused on structure and silhouette, the delivery of this bold concept was impeccable. The concept was ‘shed your cloaks of tradition and embrace your modern true self’, while initiating a whole new bridal look that was more about layered separates that could be worn once out of the bridal altar. Nabila’s vision of the modern bride is such that, “it’s about minimising and modernising the traditional”.

The show’s opening garment saw a model overthrow the traditional angharkaesque kameez to reveal a long gown with an embellished bodice.

Sonia Azhar worked hard to create a Zen environment, with an imposing Buddha on one side and earthen dishes on the other side, but her bridal showcase, ‘Enlightenment’, with dazzling diamantes, was at odds with the serene and sublime look that she was trying to achieve. For a designer as senior as herself, the ensembles lacked a signature look and played extremely safe with the same old colour palette of tea pink and red. Also, poor finishing of the garments coupled with the fact that one could see clear influences of other behemoths like Umar Sayeed, Hassan Sheheryar Yasin and Sana Safinaz in her general aesthetic, it felt as if the PLBW platform was a wasted opportunity by Azhar to show that she is a designer with a difference. “I made a very wearable collection, keeping in mind our country’s culture and restrictions. It wasn’t a fanciful collection as people like to see what they can wear. Hence, my presentation was about clothes and not some theme,” said Azhar.

Kiran Aman’s jewellery has the ability to transport you to eras bygone. In her collection, ‘Sceptres of Beauty’, Aman presents an evocative showcase of a woman’s dual nature to simultaneously conceal-yet-reveal. Pieces crafted and centred on emblems of this characteristic (such as a parasol that women used historically for protection; the fan that she used to provoke admirers and the masque to conceal her facial imperfections) are all the qualities and roles that cosmetics today have replaced. Since Aman’s philosophy is rooted in celebrating the unconventional woman, the show closed with a performance by dancer and spiritual therapist Naheed Siddiqui. Siddiqui, then became an extension of Aman’s ethos to
represent a woman of substance who isn’t apologetic of her sexuality.

Aman teamed up with clothing label ‘Dishya’ by Yasmin Shaikh, who created audacious ensembles in bold, solid hues of orange, royal blue and emerald green. “The synergy with Yasmin was great,” said Aman. “We decided to use ‘mesh’ since it is sexy and highlights the erogenous zones of a woman’s body.”

However, one felt that the clothes’ own strong design ethos overshadowed the jewellery, which itself was making a potent statement. “I wanted to show a collective presentation,” defends Aman. “Nobody ever wears jewellery to a wedding or party on plain clothes. Jewellery is always worn in consonance with clothes and that’s how I wanted to show my pieces.”