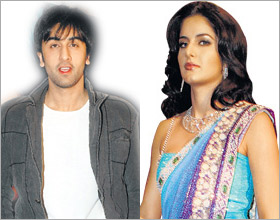 Poor Katrina Kaif never saw this one coming. She had to pack up the shoot to nurse her injured nose after co-star Ranbir Kapoor’s hand hit her face during the filming of Ajab Prem Ki Gajab Kahani at Madh Island.

The incident happened on Monday evening when the stars were shooting a chase sequence. “An elaborate set was created at Madh Island and it was a chase sequence where Ranbir and Katrina were supposed to be running away from some goons. All was fine till the point where Ranbir needed to suddenly turn around. He did that but in the bargain hit Katrina’s nose with his hand and the delicate actress went tumbling to the ground. She was in great pain but realised that it was unintentional, so she didn’t complain,” says a member of the crew.

The shoot, however, was called off for the day and even the following day Katrina went to see a doctor so the schedule could not be completed.

Director Rajkumar Santoshi admitted the incident did take place but had a different reason for the cancellation of the shooting. “Yes she was hurt but she is fine now. There were no complications,” said Santoshi. “The shoot on Tuesday was not cancelled because she was hurt but because we had some decoration work to do on the set.”

After repeated attempts to reach Katrina, she finally SMSed back saying, “Yes (it did happen). It’s ok now.”

Meanwhile, we think Ranbir might be hoping Salman Khan doesn’t take too unkindly to this whole episode.