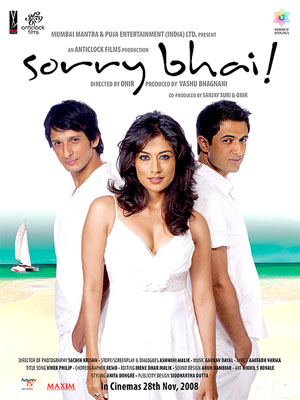 Geeky scientist Siddharth Mathur (Sharman) is given their mother’s ‘swear’ by elder brother Harsh (Suri) to bring her along for his wedding to be held in Mauritius. Their mom (Shabana) is least interested in attending the wedding because Harsh has planned to marry against her wishes. Siddharth succeeds in bring along mom and jovial dad (Boman) to Mauritius. Since Harsh is pre-occupied with lots of work he lives it to his fiancée Aaliyah (Chitrangada) to show them around make them feel comfortable. Herein starts the trouble as since their mom doesn’t really like Aaliyah, Siddharth ends up spending most of the time with Aaliyah. At the same time Aaliyah starts feeling neglected because of Harsh’s workaholic ways and starts getting drawn towards the very loveable yet shy, Siddharth. What happens after they both end up falling in love with each other forms the rest of the film.

Sanjay Suri is as easy going as usual but despite being the co-producer of the film, his character appears neglected in the second half. Sharman puts up a convincing act and perfectly fits the part. Shabana has a wonderful knack of doing some really difficult parts that look easy on paper. She succeeds yet again. Boman as the forever leg pulling father is back in form after some hamming acts in films like Yuvvraaj, Love Story 2050 and Dostana. Chitrangada Singh not only looks extremely sensous throughout but also puts up a nice natural act.

Onir fails to hold your attention for two hours. The biggest blame for the same goes for the poor scripting. The film is predictable from the word go and the dull pace literally puts you off to sleep. The whole ‘Maa Kasam’ thing ends up being unintentionally hilarious. Imagine, Shabana giving a mother’s swear to younger son (Sharman) to let go of the forbidden love so that her elder’s son upcoming marriage is saved from trouble! Also, though Shabana and Boman appear almost like a real life couple, the whole attempt appears like the maker is keen to recreate the couple’s magic from their last film together, Honeymoon Travels Pvt. Ltd. The music too isn’t something that has immediate recall value. Agreed there a few funny moments but barring them, the bold themed film with so many minuses going against the film, it appears little chance that it will appeal to its target – the multiplex audience.

The film would have been an okay one time watch had the writing been little more imaginative, but alas!