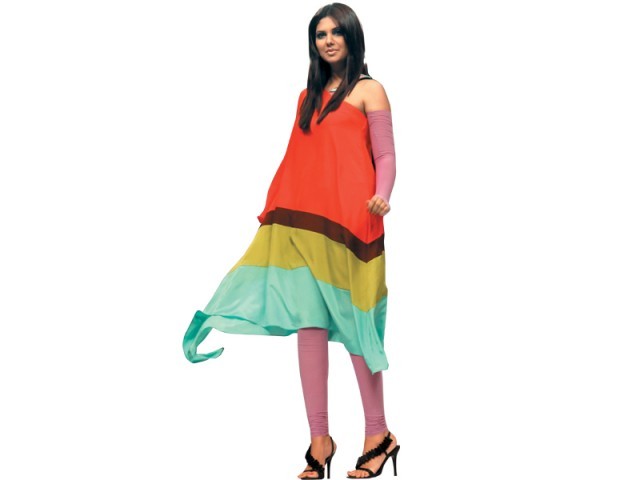 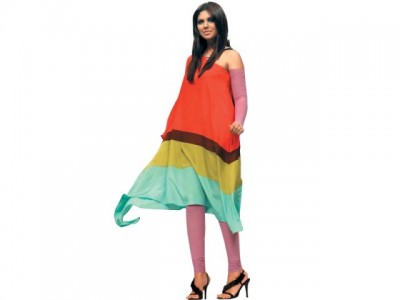 Republic is one male brand that isn’t afraid of going all out: cuts, colors and accessories, the collection had it all. Although Omar Farooq, the force behind Republic, isn’t a designer per se, the quality of his craftsmanship proves that sometimes a wild and ardent passion is enough to put you in the top league. As always, Republic delivered impeccably on the cut and tailoring with ‘Blaak Chrome’ but it missed the experimentation that he delved in with his previous collection. The current collection came off bland, largely due to its use of the conventional (and safe) use of greys and blacks. However, a shaded grey-to-white suit made a mark, as did a tan trench coat paired with animal print pants.

The House of Kamiar Rokni did it yet again. A clean, European chic collection of candy pop colour blocking, Rokni’s collection took a complete departure from the designer’s signature folk style to prove just why he deserves to be crowned the ultimate fashion genius. ‘The Modernist’ was a collection that can easily grace any international runway, make headlines and swarm trend reports. Rokni stated that he was going Muse-ish but the juxtaposition and the use of clashing colours like fuchsia, lilac, lime and aqua to seamlessly coalesce together was something only a designer as deft as Rokni could have done.

From the moment she had debuted, Ayesha Farooq Hashwani had a very palpable Sana Safinaz aesthetic of cascading luxury, minimal embellishment and a play on cuts for an urbane and affluent crowd. And while flowing and draped creations have become Hashwani’s signature, they are much too akin to the first ladies of fashion: Sana Safinaz. Her showcase, fit for a holiday in Saint Tropez, can never be defined as pret and although she is known for her penchant for jewelled tones and slinky dresses, it’s about time to show some mettle in design and silhouette. Everything that she showcased was a rehash of previous collections save perhaps a raven one-sleeved jumpsuit with a bedecked sleeve whose embellished cuff killed the grace of the ensemble.

Muse’s title for its collection, ‘Confectionary’, actually suited Kamiar Rokni’s ensembles more as he borrowed on the brand’s minimalist Parisian chic look but gave it his own spin with his weaves of colour. Had Rokni not presented his ‘Modernist’ collection, Muse may have ruled the night for its sleek tailoring and immaculate finishing. What was disappointing, however, was a regurgitation of the brand’s previous collection which emphasised heavily on two-toned, discretely tiered jumpsuits with embellished tops and plain bottoms. Round hemlines also remained but this time with pleated gharara pants.

Hailed as the king of couture, Hassan Sheheryar Yasin showcased a spritzer of ensembles in keeping with his brand’s ethos of unapologetic glamour. Consisting of short and floor-length dresses along with saris and lehengas, the collection boasted clothes fit for a glamorous night. The ensemble was a mix of colours including royal ink blue, mustard and white. Yasin thrives on the elaborate and the flamboyant and even in this collection of a traditional and cosmopolitan mix, he retained that focus. Interesting innovations were fusion pieces like a blazer atop a worked lehenga and a trailing sherwani cover-up over a sari.

The Finale – The Red Dress Collection

In keeping with the international trend at fashion weeks that either start (such as New York Fashion Week) or end (such as Dubai Fashion Week) with a red collection, PFDC incorporated the same in its fourth installment. Although the collection had veritable names like Sara Shahid and Sana Safinaz who can spin wonders with unadulterated fabric, it was Khaadi’s origami-encrusted pleated dress, HSY’s futuristic gown and Nomi Ansari’s version of a bold strapless LRD (little red dress) that hit the mark, proving that not many designers can work with pure fabric to create a majestic creation.