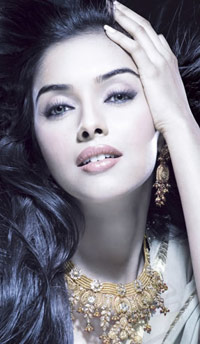 Asin got her name established in the glam-world through south cinema and now the diva is making it big in Bollywood. After receiving positive feedback for her debut Hindi release Ghajini the diva seems to be on cloud nine.

According to our sources the stardom has started ruling her head now. The glam-doll recently showed her bit of starry tantrum on the sets of her upcoming Hindi flick where she would be seen opposite Bolly-star Salman Khan.

Manzoor Khan, the make up artist and hairstylist walked out of the film because they could not stand Asin’s chin-up attitude.

The make artist said that even though Asin comes from South Film Industry she behaves as if she is from Hollywood.

Producer of the film supports the actress saying that Manzoor Khan was asked to leave because his work was not appropriate for the film.