It is exciting to see that in a short span of time, Crescent Lawn has been able to muster and create a large fan following for itself, despite all the pomp and show and heavy launches of all the other lawns,” says Faraz Manan, the artistic brain behind Crescent Lawn 2012 collection.

There is a strong delicacy to the way Faraz explains the beauty of his designs. There is pride, passion, positivity and ambition. You feel yourself already engaged and enlightened with the yet-to-be-launched lawn. “Keeping your product’s edge over other competitors is the hardest thing to do sometimes. But then, at the end of the day, it’s all about creativity and hitting the target audience’s interest with a fine presentation of the best prints,” Faraz says. 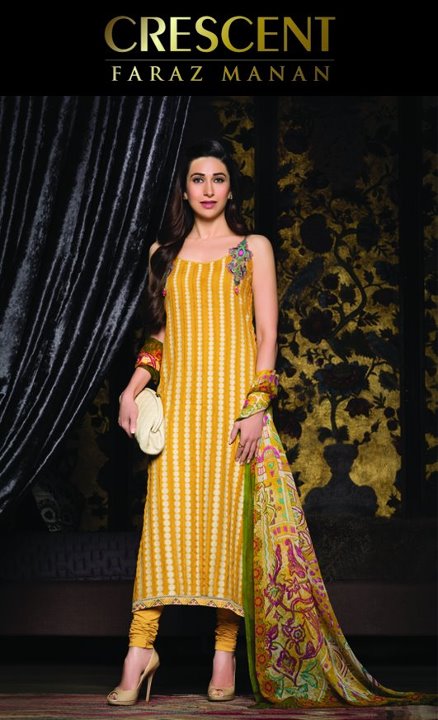 You can instantly gather the acumen and fashion know-how the fabulous designer in front of you holds in the way he briefly but effectively explains the pros and cons of fashion indulgence. “You see, being a fashion designer is a big responsibility. It is a huge role, which you are playing in contributing to the society, as people invest their trust in you to fulfil the promise being promoted by the advertisements. I have made sure that Crescent Lawn stays true to its promise. The luxury and finesse of the lawn being projected by our muse Bollywood beauty Karisma Kapoor, is very much there in the lawn available at the shops. We have a business to run successfully, which can only be possible in reciprocating our customer’s dependence and reliability in our brand. The competition is huge sometimes when designers like Sana Safinaz, Umar Sayeed and Kamal, which are trendy and fast-paced and also my personal favourites, come up with new couture every now and then, keeping the rest on their toes. But then competition also does wonders as it keeps me hooked and glued to my passion and brings out the best in me for everyone to see.”

Intrigued by Faraz’s zeal and fervour, I suddenly become curious to know why the iconic Bollywood star Karisma is roped in for Crescent’s projection and a not-so-famous fashion model instead. Is it because Crescent was doubting its own credentials? Is it because a Bollywood star has the power to garner 50 percent of the sales? “I am glad you asked me this, because I can answer you with a fine demonstration. Had I been eyeing and vying for a sky-rocketing sales figure and not trusting my own skills and credibility, I would have approached the contemporary Bollywood actresses who are working far more actively in films than Karisma herself. Firdous Lawn did exactly that as you might remember. They took up Dia Mirza, Deepika Padukone, Kareena Kapoor and Sonam Kapoor to model for their designs that probably no one wanted to buy by the look of it.

They must have paid those Bollywood actresses a hefty amount to be their muse, just to attract customers. Whereas, my prime focus, as I mentioned earlier, is always on the quality and the design. The selection for the model comes much later. Our top fashion model Iman Ali, who is a dear friend and someone who loves wearing my designs, was approached by me much earlier to model for Crescent, but unfortunately she was caught up with a lot of things already.

Iman carried the dress I designed for her with such grace and poise at the 2008 Zee Cine Awards, where she had to present a special award to Bollywood actor Shahrukh Khan. Iman supported me through and through and also thought it was a fit and fabulous idea to have Karisma on board. The reason why I chose Karisma was that other than being a complete charmer, she knows how to pull off a Western as well as an Eastern look with utter comfort and elegance. I did not think it important to go for another model or Bollywood actress to flaunt my designs for my latest Eid Celebration 2012 collection.

What was flattering and blissful to know was that Karisma told me herself that she never endorses any commodity unless she truly believes in it herself. She believed in me, my designs and my approach to what I indulge in and hence, agreed. She told me that she was approached by other lawn designers as well, offering her whopping amounts to model for them, but then she was already so fulfilled and happy with the way I had designed and clothed her for the advertisements that she never felt the need to get signed up by any other. I also remember her telling me that money was never the issue for her when it came to endorsing brands. So there! I was overwhelmed by her confidence in me.”

I recall interviewing dozens of fashion designers throughout my career. Some of them have been fashion stalwarts, veteran fashion industry big wigs or newbies in this industry who have managed to do really good for themselves. But the amount of self-confidence and self-assurance Faraz exudes goes unparalleled. What about Rouge? It’s missing in action isn’t it, I ask. “Well, Rouge would always be my baby. But obviously, after getting busy designing for Crescent, Rouge has automatically taken a backseat. But it’s not like I am abandoning it.”

All this talk makes me impatient. I can’t wait to get my hands on Crescent Lawn’s latest Eid Celebration 2012 collection. What are you waiting for girls, the best of designs are already here, launched with perfection and stocked in bulk.