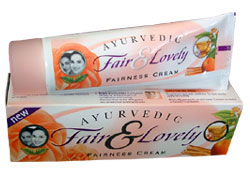 Which brand is the largest selling cosmetic cream in the world?? Answers anyone? Nivea? Wrong! Oil of ulay? Wrong again…hah! The right answer is…(drums rolling)…FAIR AND LOVELY skin lightning cream! (gasps and screams)..shocking isn’t it? I always thought that this might only be true for good old Pakistan or generally Asia -but if statistics are to be believed (you can occasionally trust them), then fair and lovely rules !And it’s sold mainly-if not solely in Asia.

Think about that. Here we were believing that all such views were outmoded. That no longer do people judge you by the colour of your skin. Apparently it was all our misconception. Maybe in other parts of the world people are still generally relaxed about skin colour but here in Asia, and specifically Pakistan, white is still right!

We all know that asians have a marked preference for light complexions. You all must have been warned at one time or another not to bask in the sun lest u get tanned and your tanned skin then ruins your matrimonial chances! Sounds familiar? Read on…

In times long gone, fairness was held as a privilege of the rich only – tanned skins being the definers for the working classes. As time went on though, these rules got switched. Now the rich are the ones who have the tanned skins since they can afford going to sun-drenched resorts for their vacations. But somehow, Asians clung on to old traditions and especially now there seems to be a craze to return to our roots, and this can be proved effectively just by seeing the demand for fairness creams. Forget fair and lovely, we now have every big brand investing in their own set of fairness creams (nivea and oil of ulay included).

We all say we don’t believe in all this and are very mod-shod in our thinking, but ask yourself -truthfully. How many of you have a fairness cream on your dressing tables right now? You might scorn it but you still use it! Far from people getting over the ‘Ive-got-to-be-fair-or-I’m-ugly’ syndrome, the ads on TV on these wonder creams seem to be increasing day by day to meet up with consumer need!

Picture this ad – modern, fair, jeans-clad, articulate young woman with good job, cute guy, awesome car, smiling and living life to the full, how has she reached such a pinnacle of success??? Fair and lovely ka kamaal hai!

Hello! What message is this ad supposed to impart on all those impressionable minds out there? That this woman (who symbolizes the women of our age) is not prized for her brains (which should have been the reason for her getting a good job), not for her attractive personality (which should have been what got her the guy)-nooo…These people go about flaunting that it is only her light complexion that is responsible for her career as well as social success!

Too long have we heard songs on ‘gori rangat’! In fact women rights activists have gone as far as demanding that such offensive ads be pulled off the box. These advertisements are imitating real life…and they’re depicting a materialistic world. Stop thinking about your chances of marriage being ruined. If the guy/girl judges you by how you look, they aren’t worth having anyway. Stop giving in to taunting old relatives who go on and on measuring you on the fairness Richter scale. Embrace your natural skin tone and good riddance to the rest!

1 thought on “Who is the fairest of them all??”