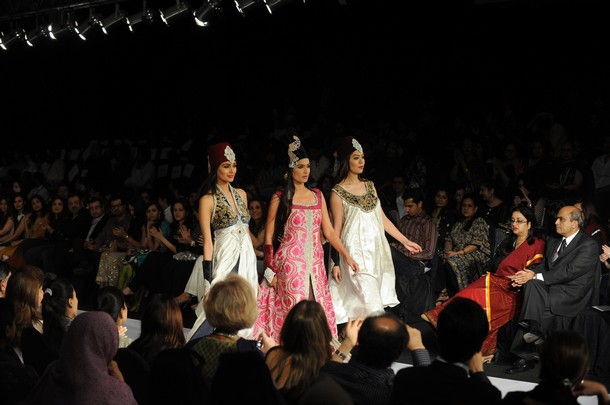 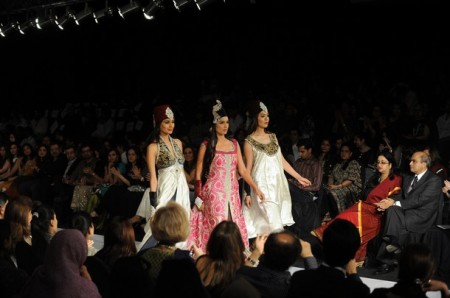 There was none of the hoopla and eager anticipation that invariably accompanies the opening night of a fashion week as the Pakistan Fashion Design Council (PFDC) Sunsilk Fashion Week commenced at the cusp of the Pakistan India World Cup semi-final in Lahore. Designers and fashion journalists had already given their ultimatum that there would be no showing (and certainly no viewing either) on the designated second day of the week that clashed with the epic match. And the spill-over effects of that nervous alacrity could be felt as the PFDC’s round three began in a rather damp manner.

It is has become customary, it seems, for Nikki Nina to open the event each time and while one expects the brand to falter every time, its spring/summer 2011 collection pleasantly surprised us all. Retaining their general aesthetic of combining block prints with indigenous embroideries culled from Sindh in their signature palette of black, green and fuschia, the collection came together beautifully in a harmony that would previously get smothered under confused styling (Fez hats from last year anyone?) and jarring designs. After two ungainly attempts at fashion weeks, the label may just emerge this year with a solid identity and even dictate trends with the striking sheer block print churidaar with muted gold embellishments at the edges, amongst an array of lowers like harem pants and the dhoti shalwar, and the double kameez with a shorter hemline on top of a longer one.

Yet in spite of finally creating a collection worthy of the ramp, why will these women not wear their own clothes for the final walk, particularly when they have eventually managed to get it right?

Yahsir Waheed
Yahsir Waheed rose to critical acclaim in their previous showings but completely lost the plot in round three. Waheed shot himself in the foot with his Gandhara inspired velcro jumpsuits, the 80s awami shalwar kameez and summer dresses that attempted a play on fabric and textures but just got it all wrong by trying to show a collection that was neither autumn/winter and not quite spring/summer either..

From a designer as seasoned as Waheed, one expected a lot more than merely pasting a large Buddha face at the back of capes and hoodies.

Sublime
Sara Shahid of Sublime closed for the night in a vibrant carnival of colour reminiscent of Basant in yellows and oranges that celebrated every kind of Pakistani woman: the veiled and the unveiled. The message of a peaceful coexistence for both kinds of women in tolerance and harmony was reflective in the spectrum of attire that Sublime offered: a summer dress, a halter top, a kameez and even a burqa- but all drenched in color.

But, if only, Shahid would have experimented more with cuts, she needs to push her creative boundaries, a showcase of floor length gowns in single tones took away from the profound impact that her burqas had made.

Saai
Sahar Atif’s label Saai came into the spotlight for reviving traditional crafts such as chikan kari in a more contemporary aesthetic. While her last showing focused on texture and creating meticulously pleated fabric, she went back to her intended focus of revival of craft in her third fashion week showing to bring kashmiri embroideries to the fore. To dramatise the collection for the ramp, Atif crafted garments around orbits ala Judy Jetson.

The idea was novel and could have worked as a unique amalgamation of futuristic fashion with traditional craft but it just didn’t come together as coherently as it should have with the cut work and mediocre finishing. Even the pertinent choice of the rustic Arieb Azhar fell flat with the hall acoustics.

While the more established names demonstrated hits and misses, it was the younger lot that made one sit-up and notice the exciting direction in which Pakistani fashion is heading. Each is distinct in their own way, the new fashion brood: Muse, Fahad Hussayn, Burhan Khan, Zaheer Abbas and the brightest of them all, Mohsin Ali, stole the night with their inventiveness.

Muse retained its minimalistic chic look by focusing on effective colour blocking and pleating ala Issey Miyake that lent structure to the whole collection. With immaculate tailoring and finishing, the brand made its mark for clothes that were clean and sleek and personified elegance for the woman who truly understands that less is more.

One wished however that Zaheer Abbas’s collection wasn’t so reminiscent of Adnan Pardesy’s ‘Plathonic’ that for a moment made one question whether Pardesy is showing his previous collection again. But, while Pardesy relied entirely on quilting for its powerful effect, Abbas made the collection more wearable and incorporated elements such as draping with volumes of fabric, from his first showing at the Fashion Pakistan Week.

Sublime offered a summer dress, a halter top, a kameez and even a burqa- but all drenched in color.

BeeKay’s ingenuity could be seen in how effectively he managed to curtail the urge to go wild with a punk, goth, tar collection that was replete with jackets, hoods and leather boots with models stomping onto the ramp to disturbingly mind numbing eerie music. This is the kind of edgy fashion that no one has attempted so far — given Burhan Khan’s controlled construction; he is bound to go far in providing appropriate clothing for boys like himself who cannot do the ‘nicey-nice’ fashion.

Fahad Hussayn and new kid on the block, Burhan Khan of BeeKay, both did a purely raven collection that was edgy and rock chic in their own distinct way. While Hussayn used his classic black and gold pallete with his signature motifs, he added gold origami flowers to encrust his garments. Always theatrical and towards the macabre, Hussayn doesn’t become morbid even though he did showcase a model completely sheathed ala McQueen. There are always layers of meaning in Hussayn’s work, which he symbolically demonstrated as a model did a strip tease of sorts as a glove flung here, and a jacket flung there over the audience’s heads.