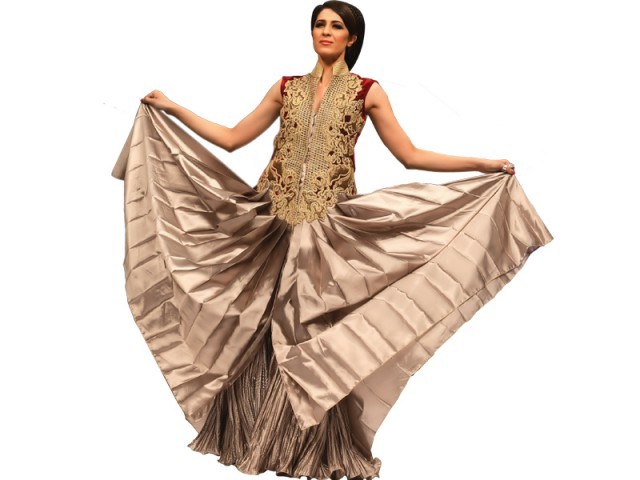 Yashir Waheed
Back to Life

From a seasoned designer like Yashir Waheed, one expects a greater emphasis on construction which his previous and current collections have sorely lacked. He attempts to go back to the soil and resurrect the rustic khaddar, a fabric that holds historic and political affiliation to the history of the subcontinent and marries in with ajrak, a symbolic piece of heritage in itself, for a sporty and masculine collection for men and women. Despite being a pret savvy collection, Waheed played it too safe and although the ajrak jackets were fun, they were also predictable.

Ammar Belal has a penchant for either teleporting one to a bygone fashion era or transporting one to a different country and clime, and has one grooving to his tunes. Whatever he chooses to do, he manages to create a wow factor in his animated and vivacious presentation, but with Disco Inferno one expected wild and inhibited mad choreography that would have one jumping off the seat to pose like Elvis – which Belal didn’t quite deliver. In his current showcase, he went back to the frivolous seventies of Saturday Night Fever, shaded jeans, flared trousers, flower power and relaxed bohemia. The fact that he can tailor pants like none other is an unparalleled fact, however, what Belal showed this time is that he can create a killer dress just as well and displayed a peek-a-boo body hugging mini dress that was scandalous and supremely sexy.

Taking cue from his favourite item of classic Pashtun attire, the gold dori waist coat, debutante Hammadur Rehman created an opulent showcase in pewter with scarlet velvet and gold dori work where he reworked the iconic Pashtun vest to work as a kameez, sari blouse and even a dress. It was a retail worthy collection, replete with long kameezes and a range of pieces that married the military to a more traditional form and silhouette but didn’t excite as much as one would expect from fresh blood like Rehman.

Karachi Khaas
The City Within

Monochrome Urdu newspapers, crows perched on precariously strung electric wires, shamwaanas, truck art and Lollywood posters on ageing heritage buildings is what makes Karachi the grand, vicious and vibrant metropolis that it is. Picking up on these emblems Khaadi sought to make Karachi ‘khaas’. Working largely with a raven and white palette with splashes of reds to connote Karachi’s bleak socio-political landscape, Khaadi created a magnificent collection in print, pleated fabric and irregular hemlines in its signature cut and silhouette that made every Karachiite throb with a strange love and despair for the city they call home.

In a pure muslin collection in solid single colours that ranged from salmon to magenta to marigold and lime, Adnan Pardesy demonstrated very clearly what a master of craft he is. From quilting to working with denim, he can dexterously coax any fabric to suit his mood and need. To work with yards upon yards of material as humble as muslin, and to cajole it so as to develop the alacrity akin to any other luxe fabric so it drapes, weaves and billows with volume to create a casual work attire or an elaborate red carpet ensemble, is no simple task.