Freckles are flat, circular spots that typically range in the size of the head of a nail. Freckles are small tan spots of melanin on the skin of people with fair complexions. The word “freckle” comes from the Middle English “freken,” which, in turn, came from the Old Norse “freknur,” meaning “freckled.”

Freckles are small brownish spots on human skin, predominantly found on the face. Freckles discrete specks or spots which develop over sun-exposed surfaces, particularly the cheeks and nose. The basic cause of freckles is special cells in the skin that produce a pigment called melanin. Excessive build-up of melanin in one place will result in freckles. Freckles are small flat brown marks arising on the face and other sun exposed areas. They are seen in children and in fair skinned people especially those with red hair who have an inherited predisposition for them.

There are two basic types of freckles first is ephelides and second is lentigines Ephelides flat spots that are red or light-brown and typically appear during the sunny months and fade in the winter. They are most often found in people with light complexions and in some families, they are an hereditary (genetic) trait. Lentigines (singular: lentigo, from the Latin word for lentil): Children may develop a small tan, brown, or black spot which tends to be darker than an ephelis-type freckle and which does not fade in the winter. This kind of spot is referred to as lentigo simplex. Lentigines are part of a rare genetic syndrome, for the most part they are just isolated and unimportant spots. 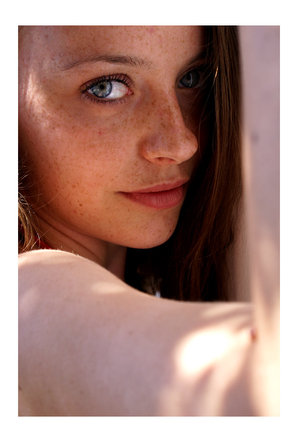 1.Brown spots on the face.

4.Moles are often produced at the affected area of skin.

4.Laser treatment Several lasers, especially ones that produce a green light, can lighten and eliminate freckles safely and effectively.

6.Horseradish juice or horseradish vinegar, or oatmeal dabbed on the skin are also helpful in lightening freckles.
Source: Articletrader