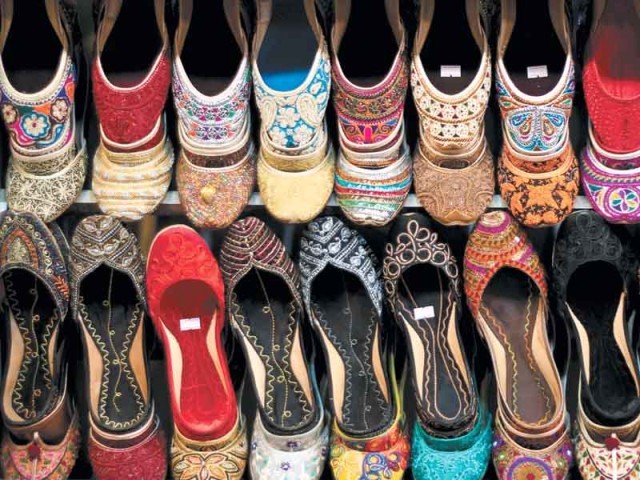 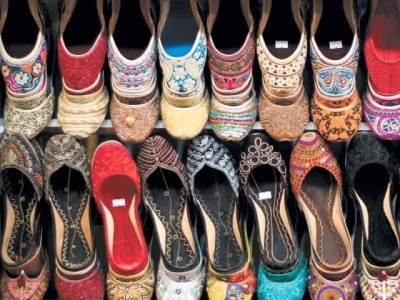 Any Lahori will tell you that when visiting Lahore, a trip to Khussa Mehal is as crucial on your ‘to do’ list as is visiting the Badshahi Mosque and having a meal at Cucoo’s.

Sure the inner city is full of khussa makers and boasting over these shoes is conventionally Multan’s territory, but akin to any designer brand, the khussa from Khussa Mehal is distinctive and unique. It has been nearly 30 years since the store’s inception in Liberty market in the centre of the famed Dupatta Gali and it is still the reigning kingdom of khussas.

Cashier Ifranullah, who has worked at Khussa Mehal for 12 years, attributes the store’s success to their evolving design ethos. “We are always innovating with new designs and experimenting with various kinds of work and embellishments. Of course our quality also is also unparalleled,” he says with pride.

The khussas popularity in recent times can also be credited to ballerina flats making headway into casual footwear. A local and far more blingy variant of the ballerina shoes, khussas work extremely well to jazz up the usually sedate western casual attire.

Shahid — a salesman who has been associated with the store since 1993 — shows off the brand’s wares with warm personalised service. “Our zari chappals and the back-open khussas are our personal innovations and these shoes are picked up in bulk by some of our clients who sell them abroad as well.”

He narrates the tale of how Khussa Mehal was the pioneer in creating a separate khussa for women; a concept that didn’t exist before since the shoe was considered to be unisex. “Many years ago, an old customer walked in asking for shoes he could wear for Hajj demanding that only his toes were covered,” recounts Shahid. “Hence we developed khussas with a smaller curvature to meet his requirements and that type of shoe became the female option.” However, despite these innovations, there is still no concept of a right or left foot fit — a property that lends the khussa its novelty as well.

The store also makes customised shoes for occasions. “Brides usually come to us for matching footwear and we ask them for a swathe of their wedding ensemble and then copy its design onto the shoe,” states Tanweer, a salesman. Such personalised shoes don’t cost extra and take only a week to make.

With only 12 designs coming in every month, and a process time of two months for an old design to be recreated, Khussa Mehal manages to be as exclusive as a designer shoe store; very rarely will designs be absolutely identical. And despite a flourishing market of khussas in the inner city in Lahore, Khussa Mehal outsources its work to Sharakpur, Ahmedpur, Sharkia, Dera Nawab and Bahawalpur.

In nearby New Delhi, one can see Khussa Mehal’s ornate footwear line Karma, a high-end fashion retail store. These shoes are virtually smuggled in suitcases by diplomats’ wives or socialites and sold at thrice their retail price. Yet, Shahid seems unperturbed by this and calmly states, “We do extremely well in Lahore and have no need to monitor what’s happening outside.”