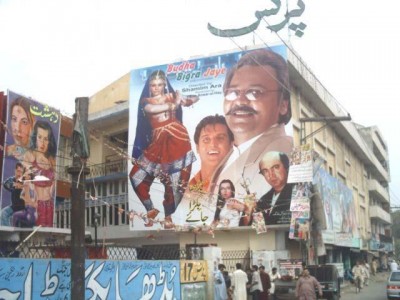 The recent string of newly released Pakistani films has failed to make a dent in box office sales, suggesting a continued decline of Lollywood, due to the lack of response by audiences.

Cinema owners suggest that the film-makers must make movies of international standards if they are to capture the Pakistani market. They said that very few films had been released this year, including Urdu film Khamosh Raho and Punjabi film Ek Ghazi Aur. Both lasted merely three days at the box office and were deemed as ‘utter failures’ due to poor film-making and lack of marketing.

Chairman Pakistan Film Ex-hibitors Association, Zoraiz Lashari thinks the cinema industry is going through a changing trend. Now, investors don’t find large 800-seat cinemas cost-effective due to the overhead cost. As a result, more people are interested in investing in cineplexes which cater to 200 people and have better screen quality, he said.

Explaining the relationship between cinemas and the film industry, Lashari said that during the 1980s, many cinemas had started investing in films to improve the quality of these projects. However, the practice did not last for long with the advent of pirated foreign films and cable television.

“The film industry has to cater to larger markets, which are very different from those that existed in past. Now you have lesser cinemas, so making profits is difficult,” said Lashari. “They have to think about markets, like India, Dubai and Britain, which can potentially improve sales of the local films.”

Sharing the statistics, Lashari said that there used to be 700 cinemas in Pakistan in 1972. Lahore alone had 63 cinemas, but now the number has gone down to 15.

Criticizing the quality of Lollywood films, Lashari mentioned that the film-makers continue to use old 15 mm cameras and the scripts continue to overplay gangster themes which people cannot relate to. On average, Pakistani films have a very low success rate, Lashari said, pointing out that Syed Noor, who is otherwise considered as Lollywood’s ace director, has a failure rate of 90 per cent.

Because cinemas are becoming increasingly dependent on foreign films, the risk of a film’s failure typically lies on the producer’s shoulder. Qaiser Sanaullah Khan, owner of Metropole Cinema, said that four or five films had been planned to be released this year. However, two of the films — Ek Ghazi Aur and Khamosh Raho — that were released, flopped at the box office.

“As cinema owners, we look forward to Indian films for our survival because there are no good Pakistani films being released,” said Khan. “Lollywood films have no marketing budget or anything to bring people to the theatre.”

Ghafoor Butt, the producer of Khamosh Raho, had a different perspective. He said that it was simply unfair to criticise filmmaking as films like Khamosh Raho had been considered a success by the critics. It is simply the people who discriminate against Pakistani films, he said.

“We cannot compete with Indian films. There is a market for Punjabi films but Urdu films are no longer popular,” said Butt. “People are unwilling to leave their home for these movies and in the end that cannot be blamed on the film industry.”