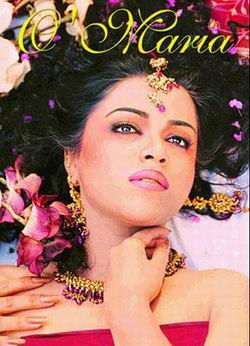 It is a hot and humid Saturday afternoon when one reaches a local salon to meet Maria Wasti, who happens to be in Karachi for a drama serial she’s shooting. Dressed casually in a T-shirt and jeans, her hair all over the place, we settle in comfortably, she with her cup of chai and me with my tape recorder, notepad and pen. The conversation begins with the much clichéd query: how did she come into acting?

“God I hate this question! I’m sick of it,” she says. “I guess you have to ask it. Bakhtiar Ahmed, who was the programme manager of Lahore TV at the time cast me in a long play called Sarah aur Ammara.” This was around eight years ago. The story revolved around two sisters who were settled abroad, and whose parents tried to match them with possible suitors from Pakistan. The other sister was played by Resham.

After her first experience in acting, Maria realized her passion for the art. Her family, she says, were very supportive, but did tell her to treat acting like a ‘real’ career and pursue it in a professional manner.

“Although my father wanted me to become a doctor, I was lucky that my parents weren’t the type who force their opinion on their children,” she says with a grin, “and they’ve let me and my siblings pursue the careers of our choices.” She adds that the main reason she didn’t want to pursue a career in medicine was basically because she “wanted to look at people in another way rather then dissecting them. I’m a pure romantic, and that line of work is hardly romantic.”

Maria views acting as a vehicle which she uses to express herself, something she feels that everyone needs to do in order to be fulfilled and happy, irrespective of the medium.

“I realized that I was really not the type who could do a 9 to 5 job — I hate waking up in the morning. I still cannot get used to it.” But she has no regrets, despite the ups and downs that she has faced. “I’m lucky that I came into this field; I feel that I wouldn’t be the person that I am and would be out there somewhere, miserable and unhappy, if I hadn’t come into acting.”

After her first TV appearance, Maria began to get a lot of offers, and ended up doing numerous plays for Lahore, Islamabad and Karachi television. Plus, besides enjoying her work immensely she also managed to explore another one of her passions: travel. “Travel is the best university in the world, you get to learn so much through it,” she declares.

And what were reactions from people within the industry like when she first entered the field?

“People were sceptical in the beginning, but that is the case no matter which career you opt for. But once I proved myself, people began to accept me and things changed.”

Things did change for the better and since then, Maria has played various roles and characters in a

comparatively short span of time. She’s proud of some of the roles she has taken on and speaks fondly of them.

“I did Kallo, which was a little different. Written by Bano Qudsia, the play was about a girl who is very dark — I had to put on tonnes of make-up to look really dark. It was a romantic and beautiful story.”

She also recalls some other plays, such as Neend, Boota From Toba Tek Singh and Baadalon Par Basera, in which she played a variety of characters. But despite reaching an enviable position in the industry, Maria is far from content today.

“Mujhe shikayat hai that we’re not making history,” she says, “We’re not making plays that deal with today’s issues.” And what are today’s issues? “Relationships, drugs, Aids, communication with parents and spouses and the increasing divorce rate,” she declares. “You don’t necessarily have to be explicit and vulgar if you are dealing with a sensitive issue.”

And while for many it is easy to complain and not do anything about it, Maria has been making an effort to either act in, or produce plays with substance.

For instance Baadalon Par Basera deals with the issue of a young girl who gets married to a man over the phone whom she has never met. Once she reaches the US where he lives, she finds him to be much older than the photo she saw. To add to her misery, he is quite abusive as well.

“This sort of situation has happened to someone I know, and it is still happening,” says Maria. “After the play was aired, I got a lot of feedback from people who had actually been in such situations. Our society has changed in the last few years. Relationships have become more complicated and people have also become more aware about what they want from a relationship, irrespective of their social class or education. They want to develop an understanding with their spouses, and not just stay married for the sake of it.”

The main reason for mediocrity in today’s productions, says Maria, is the sudden boom in the number of channels.

“People who acted, wrote or directed one play earlier are now doing 10 at a time, and as a result the quality of the dramas has deteriorated. Gone are the days when the entire nation sat down at the dot of eight to watch a drama. Instead of developing their actors and writers, the producers have begun to place more emphasis on clothes, jewellery, locales and sets.”

It’s easy to criticize. Is she doing anything about it?

“I’m planning two serials and right now, I am working on the story of one of them,” she responds. “I plan to work on it for at least three to four months to ensure that it has substance.” But, she adds, not every actor has the time or money to dedicate to more ‘serious’ stuff, and speculates that even she “might get tired after doing one serial, and go back to just acting.”

Moreover, Maria laments the fact that actors, writers and directors’ careers are not treated like ‘real careers’ and as a result, there is a lack of professionalism, mainly due to the fact that the industry lacks a training ground.

Unlike many of her peers, Maria hasn’t been slotted or typecast into a particular role, and this is something she is satisfied with.

“Whenever a producer wants someone to do something different, they come to me because they are confident of my abilities,” she says proudly, without a hint of arrogance. And that is why she is currently working on a show that is based on the lives of prominent Pakistani women.

“I portrayed Salma Murad for the first episode, now I am doing Bilquis Edhi. I have to portray totally different persons from another world, and this is thought-provoking. You get an exposure to the lives of these people, and every character leaves a mark on you.”

Many artistes end up working for projects that they don’t believe in, and end up compromising. Has this been the case with Maria? “Of course I have compromised, everyone does it — although that doesn’t make it right — but my concept is very different. I can’t disappear for months on end and wait for a ‘perfect’ project. Working is my education, I have to try different roles. If I wait, I’ll have to wait forever and as an actor I need to work, I have to be there. This is how I will learn. Obviously I say no to some projects, but there are many that I end up doing. I’m not going to say that I am very selective and wait for an opportunity that may never come.” She does, however, accept that a lot of talented individuals come into the industry but disappear — not because of

a lack of sincerity to the procession, but because they don’t get enough guidance from their peers.

What are the qualities one needs in order to be a successful artiste?

“You have to be educated, perceptive, observant and have the ability to pull yourself away from your own personality, put yourself in your character’s role, and then decide how that person will react. If I am doing the role of a bhikaaran and place false eyelashes, then that is my fault. And a good director, in my eyes, is not the one who tells you what to do, but what you should not do,” she adds laughing.

Unlike many of her peers, Maria is not planning to go into direction, mainly because she feels it is a “crazy and demanding” job, one which she is not up to — at least not for now. “After directing, a director should go to a sanitarium to recover. He does a lot — everything, really. I am not up to it,” she says.

“If I do take up direction, I will take out six months and then only direct, since it requires a lot of time and patience, and I’d want to do it in a proper way,” Maria adds as an afterthought.

On a more personal front, Maria is an avid reader and explores many types of literature, fiction as well as non-fiction. “I love reading books mainly because they allow you to reach another world and view life from the point of view of another person.”

She also admits that she is in a relationship, at least “until I kick that person out,” she adds with a

laugh. “I give the other person space and privacy and want the same thing for myself. The time we spend together should be cherished, but ultimately, if for whatever reason it ends, it should be on a good note.”

She adds: “Pakistani men are very possessive and relationships become harder to manager here, because family members also come into it, and for some reason or the other, they have a right to interfere.”

“I want to do more plays, play more complex characters, and make documentaries on social issues.”

I ask her if she is interested in going to Lollywood. She pauses for a second and says, “Well, I’ve had a couple of offers, but I don’t think I’ll go into movies for the time being, at least.”

And why not? Her eyes gleam and she adds with a grin: “I don’t think I have the required ‘talent’!”