Meera says she is looking forward to a full-fledged career in television. While addressing a press conference on Monday evening at Karachi’s Marriott Hotel, the actor and model talked about her upcoming play titled “Husn Ara Kaun?”. 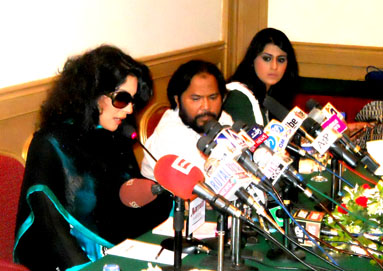 Meera said, “I am a champion of women rights and I have that’s why performed in the play ‘Husn Ara Kaun?’” This play is a TV Global presentation and deals with the life of a young girl and is set in southern Punjab. The play shows Meera as a victim of a feudal lord.

According to Meera, “The play talks about exposing the feudal system of our country that has positioned us at a critical position in the world at large. When I was offered this role, I thought I could perform it because I felt that the subject-matter discussed was close to my heart. For a creative artist to show his or her talent, one must be able to perform  (in any medium)”

Even though she said she was launching her TV career with this production, this is not Meera’s first work on the small screen. She has acted in other productions before including “Mulaqat” and “Umrao Jaan”. But she denied claims that this signaled her leaving the film industry. “How can I leave the film industry which has given me name and fame?”

Speaking about the controversial TV serial she said, “In the play, we are highlighting incest as well.”

When quizzed by reporters as to whether she was joining former president Pervez Musharraf’s newly formed political party, the All Pakistan Muslim League, Meera said that she “will only answer the questions put in front of me regarding the play.”