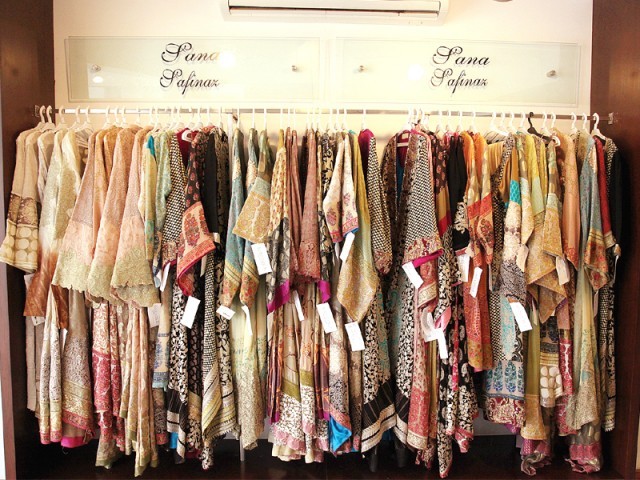 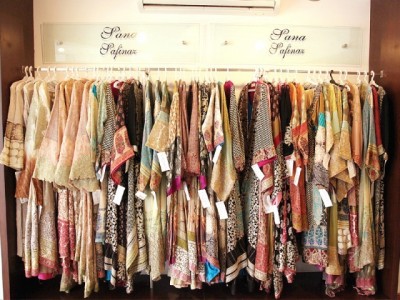 They are known to create a stir in the fashion industry by designing clothes that speak volumes of creativity.

SanaSafinaz launched the preview of its Export Autumn Winter 2011 collection on Tuesday, August 16 at The House of Ensemble, Karachi. With around 200 pieces displayed at the fashion retail store, there were only a few suits left after the first few minutes of the exhibition.

The collection reflected SanaSafinaz’s signature style — delicate and intricate embroidery, embellishments, diamantes on necklines and flowy shirts that looked more like ponchos. From the combination of pink, black and beige, to shades of green and brown, the collection toyed with chiffon as its primary fabric.

Like any other exhibition of the brand, customers started arriving at The House of Ensemble much before the scheduled time, waiting for the doors to be opened. Forty-year-old Afshan Khalid, a homemaker who had reached earlier, said: “I have always liked SanaSafinaz collections and their pret line is never copied by other people in town.”

Seeing the crowd growing, 35-year-old Sadaf Faisal called her associate, asking her to reach as soon as possible.

But for Ayesha Adnan — a newly-married 27-year-old — this was just a random stopover at the shop, as she was planning to buy something for Eid. Finding the doors closed, Adnan left, showing little interest in the brand’s latest collection.

After waiting for more than an hour, the shop opened at 11:55am, with women rushing towards the racks. Within a few minutes, there wasn’t much left on the shelves and by 12:15pm, only 17 pieces were left.

Although the shop was crowded with women, the attendance this time did not match last year’s launch of SanaSafinaz Spring Collection 2010. The reason could be the month of Ramadan, when many people avoid going out while fasting.

Shezray Husain, the director at The House of Ensemble, said: “Barely 10 seconds and the SanaSafinaz collection is sold out. There were as many as 200 pieces and with the average price of Rs37,000, the collection is affordable. One can wear it to a wedding or any other kind of celebration.”

Talking about the response in other cities, Husain said: “As you can see, there has been a massive response because the designers offer the best to their clients. With the sale going on in Lahore as well, I am receiving news that it has received a similar response. Pakistani women know how to dress. “

Zeba Husain of The House of Ensemble, said: “It was as chaotic as ever, the designers know the pulse of people and that’s where they strike.”