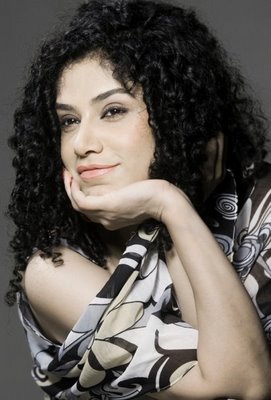 A powerhouse of creativity and talent, Anageline Malik is a well-known name in the entertainment industry. Not content with excelling in just one field, she has put together a diverse portfolio with skills ranging from acting and production to hosting, modeling and direction.

Angeline spent her early years in England before coming to Pakistan and eventually settling down in Karachi. “I was brought up in London and moved to Pakistan when I was 10,” she says, speaking about her childhood. “I spent my school and university years in Islamabad and went back to the UK for a Masters degree in Computer Animation once I completed my Masters in Sculpture. I moved back to Karachi after that and have been here since then.”

Strangely, Angeline is the only one from her family who’s been bitten by the show-biz bug. “I belong to a totally non-media family with mostly doctors. My dad was an ophthalmologist and a social worker. He passed away three years ago. He is my inspiration and strength. My mom and brother are in Islamabad. My siblings have pursued conventional careers; my brother is a doctor and my sister is a banker.”

Angeline’s big break was a mere stroke of luck. She started her acting career when another actress withdrew from a production. “I was talked into taking up the lead role, as the main actress backed out at the last minute. Since I was the co-producer, I had to find a solution, so I stepped in.”

The rest, as they say, is history. “Acting came to me naturally,” she explains.

Her first project was Musafir Din Musafir Ratein (2001), directed by Jamal Shah. Since then she has tackled a diverse range of projects and says each of them stands out for its own reasons. “I would say I am proud of every project, because I give myself to it. I’m proud of different projects for different reasons, and I don’t do anything I wouldn’t be proud of. So far, my biggest accomplishment is that I am content with who I am and what I do and I am pursuing projects I would like to do.”

After having worked as an actor, producer, director, anchor and model, Angeline has experience in various fields, so which one of these does she enjoy the most? “I enjoy telling stories the most, the way I see them. My vision. Which is completely possible as a director.”For Angeline, the support of her family has helped her establish herself in the industry and the sole reason she didn’t face any obstacles. “My family believed in me and has always encouraged me in all I’ve done.” As far as criticism regarding her work is concerned, the star says she is totally fine with it; “I love it! Any reaction works for me.”Speaking of her own career and future plans, she says she isn’t a long-term planner. “I only plan short term… long term, who knows.”