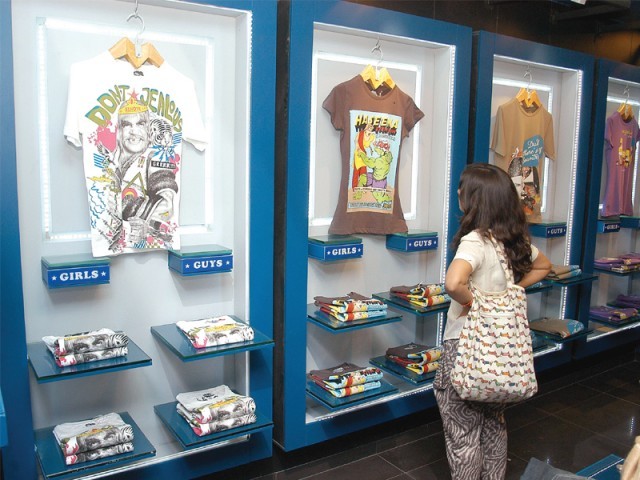 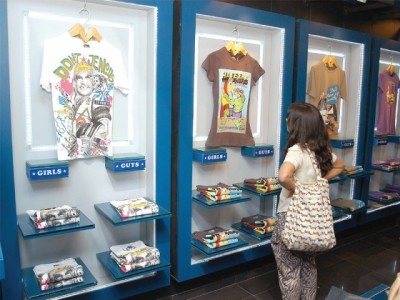 For years the fashion industry has been criticized for not adequately promoting local culture. Then came Uth Oye! with t-shirts inspired by Pakistan’s complex culture and turbulent politics. The apparel’s innovative design and message made the business an overnight hit.
Pictures of Haseena “item bum” battling a monster and Quaid-e-Azam’s iconic headshot juxtaposed with a blurb saying “dude where my country is?”, completed captured the youth’s imagination.

After creating a furore amongst the youth through online viral marketing, Uth Oye! finally opened its very own store on MM Alam road, on June 10. The new shop, which is located on the second floor of Ali Towers, features an actual cutout of a Bedford truck as the sales counter, and truck murals swathing the changing rooms.

The launch was a fresh and fun event. The innovative setup and creative decor of the new venue impressed the crowd. Rock band Quadrum’s performance, which included improvised vocals of “We will rock you” and “Uth Oye!”, energized the crowd. Many prominent celebrities, designers and young people were present at the inaugural event.

Babar Khan, the energetic creative director of Uth Oye! appeared happy with the high turnout at the event. The young entrepreneur explained that the basic intent behind his designs is to celebrate Pakistani culture. Thus his brand’s t-shirts, which essentially sport desi themes and logos, are inspired by seemingly banal social and political realities of the country, ranging from truck art to Lollywood.

“It’s not a secret that we are a very xenocentric society. We like our clothes from Calvin Klein or from other foreign brands,” said Khan. “But our brand is instead trying to perpetuate the idea that Pakistan is cool.”
Veteran designer Ammar Belal came to the store opening sporting his very own Uth Oye! t-shirt. “It’s a great initiative that has just started,” remarked Belal.

“Uth Oye!’s t-shirts are socially relevant and the business does social work, so this is really fashion for bringing about a meaningful social change,” he added, referring to the project’s involvement in several charities.

Designer Nilofar Shahid also appreciated the brand’s effort to revolutionize fashion trends by incorporating indigenous idiom and design.
“I tell fashion students that they should be proud of their identity and they should make sure that they represent Pakistan,” said Shahid. The designer added that Uth Oye! is a trendsetter because it incorporates local design and craft.

Mubeen Ahmed, a student present at the occasion, said that the biggest thing that attracted young people to the store’s opening was the dire need for entertainment. He said that there with so much negativity and turmoil surrounding people, such a launch inspired them to think positively and enjoy themselves.

The shirts displayed at the new flagship store continue to cash on the brand name’s satirical yet humorous take on socio-political issues. For instance, one t-shirt features a petrol pump shaped into a noose, alluding to the ‘stifling’ prices of oil. Another interesting t-shirt features Lollywood legend Sultan Rahi donning a crown.

Uth Oye! is now looking to expand into foreign markets.