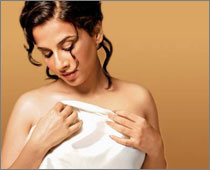 Vidya Balan is back in news, but this time not for her clothes. The sultry actress has shot for some really intimate scenes in Vishal Bharadwaj’s upcoming movie Ishqiyaan with co-star Arshad Warsi.

The actress has done such scenes in her earlier movies namely Parineeta and Heyy Babyy. A source from the unit revealed that the actress had carried off the scenes with great ease and the director Vishal Bharadwaj was all praises for the actress.

In the movie Vidya’s character is very complex and also has shades of grey. She playes the role of a scheming woman, who is two timing the uncle and nephew, played by Naseeruddin Shah and Arshad Warsi respectively.

According to sources, the actress has also been taking Urdu lessons and learning the rural dialect of UP for the movie.

As per reports, the actress will be seen in a deglamourised avataar in Ishqiyaan.