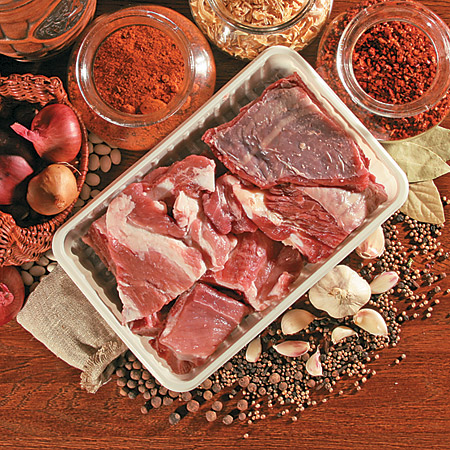 Traditionally, bay leaf and garlic are served with beef, and mixed herbs used sparingly, can all dramatically enhance the flavor. Roast beef is traditionally served with fry vegetables and salad along with the traditional raita and hot naans. Steaks are typically accompanied by fried onion rings, tomatoes and mushrooms with baked or mashed potatoes.

Mint or rosemary are the traditional herbs used with roast lamb. Stuffing includes thyme, lemon or parsley to impart a delicate flavour to lamb casseroles. Roast lamb is usually served with mint chutney, but onion sauce gives a pleasant change. A sprinkle of rosemary, half way through cooking, gives the fat a subtle flavour. Lamb for grilling is particularly delicious if it marinated for a few hours first with garlic and onions.

You Can Oven Roast, Barbecue, Spit Roast, Fry or Grill Your Meat

When it comes to roasting, grilling and frying, heat is applied directly without the protection of any liquid. These methods are suitable for relatively tender cuts of meat. Very lean meat will require a light brushing of oil to prevent drying out during cooking. This is because during cooking, meat contracts and exudes some of its juices. These form a brown, savoury coating on the surface of the meat, which results in enhanced flavour, and is responsible for the popularity of roasted, grilled and fried meats.

The meat is placed on a revolving spit, or skewers, and cooked under a direct source of heat; either in an oven or as a grill attachment.

This is a quick method of cooking by radiant heat. As the heat is fierce, the meat should be lightly brushed with oil before cooking. Grilling times vary according to the thickness of the meat and the desired degree of cooking. A general guide for a 2 cm (1 inch) thick steak is 5 minutes for rare, 8 minutes for medium and 12 minutes for well done. Steaks and chops should not be pierced with a fork during cooking because this results in vital juices escaping and the meat drying out. Also, steaks and chops should be turned once only during cooking.

This is the cooking of pieces of meat in liquid, such as water or stock with added flavorings, vegetables, herbs or spices. The meat should be cooked in no more than 250 ml (half a pint) of liquid to each 500 grams of meat, and be allowed to simmer only. Meat is stewed in a slow oven, in an ovenproof casserole with a tight fitted lid, or on top of a cooker in a covered saucepan or flameproof casserole. Stews cooked on the hob will require occasional stirring.

Braising is a combination cooking method using both moist and dry heat; typically the food is first seared at a high temperature and then finished in a covered pot with a variable amount of liquid, resulting in a particular flavor. After browning in hot fat or oil, the meat is placed on a bed of lightly fried root vegetables with just enough liquid to cover the vegetables. The meat then cooks in the steam and requires occasional basting with the hot liquid. The pan must have a tightly fitted lid to prevent the liquid from evaporating.

Pot roasting is roasting in a pot, such as a thick-based saucepan for top heat, or an ovenproof casserole. The pan should hold the joint comfortably without the meat touching the sides, and it should have a tight fitted lid. This method is a combination of frying and steaming. The meat is browned in hot fat or oil, either in the cooking pan or separately. The meat should then be allowed to cook slowly in its own fat in the combination of fat and steam and be turned every thirty minutes. In order to retain the steam, the lid should only be removed when the meat is turned.