A food expert and chef, Poppy Agha hails from Karachi and became a celebrity chef with, A Taste of Fusion, on DawnNews TV. She also runs PCI (Poppy’s culinary institute) the first and only training ground in the genre of Fusion cuisine in Pakistan. She is now representing Pakistan in Foodistan, the culinary battle between chefs of India and Pakistan. 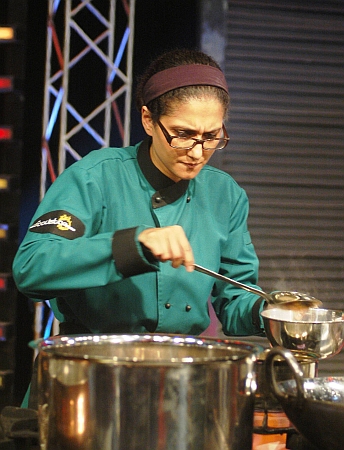 Rewaj chats with her to know about her experience so far.
Q-Much thanks for your time. We would definitely want to know the secret behind your name, how it became poppy from Khursheed Amina Agha?

When I was about three years old, my mother and my uncle were taking me somewhere in the car and I saw a Chinese restaurant sign. I got so excited that I said “Chop-Suey, Chop-Suey” Because I couldn’t pronounce words very well at that age; it came out as “Popsie, Popsie”. My mother thought that was the cutest thing she had ever heard and called me Popsie from then on. Once I went to school, Popsie became Pops and Poppy. 🙂

Q- A taste of fusion Show is about fusion cooking like a makeover of desi food; you think people accept a change in desi cuisine easily?

People are always looking for a change, and cuisine is ever changing. Health plays an important part and as we are getting more nutritionally aware of what we eat, we are beginning to move away from old school ways of cooking. Fusion is a fad, but what i have learnt from it, and I hope that people who have watched the show will also agree, that we can have very interesting food without the heavy oils and masalas and still get the same flavors. You can say it’s a way of modernizing traditional cuisine, but somehow trying to keep some authenticity in the dish.

Q-Which is the most overrated Desi Dish according to you and which one is the most underrated?

I would say that biryani is the most overrated dish and at the same time it is the most underrated dish. The reason I say this is because biryani has become so urbanized that its true potential and specialization has been lost. We have doused it in oil and serve it from packaged masala mixes. The real biryanis, and there are such a huge variety, have been forgotten which is very sad.

Q-There are a few cooking channels in Pakistan now. You are not part of them why?

I did a four year stint with Dawn on a Taste of Fusion which I loved. I am scheduled to do a show with Masala TV, and have just done Foodistan, airing on Geo, so I guess I just let the projects choose me rather than confine myself.

Q-At your culinary institute you find the eagerness or passion for cooking in students? tell us about PCI what is all about and how to be a part of it?

PCI is my dream project. People ask me why I didn’t open a restaurant. My answer is that I would rather teach people to become good cooks/chefs so that they can open restaurants in Pakistan, and of course then you would have so many more people who would do great TV cooking shows and not just 8 people that you might have today, including myself. PCI is a collaboration between me and Zahir Rahimtoolah of Labels, a project of pure dedication to the art of cooking. We are a small institution and we take on very few students at a time because we believe in giving the student a qualitative experience.

The students that come to PCI are amazing. Some want to be chefs, some want to go into the food business and others just want to learn how to cook well. Their ages range from 16-50. It’s funny I never realized how many people were interested in cooking till I opened the school.

Anyone can apply, there are a number of different courses and we try to fit the student into what would be best for them.

Q-What according to you is the culinary identity of Pakistani Cuisine? Like Biryani is associated with Hyderabad Deccan and Fish curry to Thailand etc.

Pakistani cuisine primarily hails from what is known as North Indian cuisine. But there are inflections of Afghani cuisine and Iranian cuisine which have altered our cooking processes over the years. We are known for our coal cooking.

Q- Tell us something about your experience in foodistan? How the chefs were being approached and what kind of environment was there during the show?

Foodistan was an amazing experience. I learnt new things about myself, the way I cooked and the way I approached a recipe. The environment was electric, the team absolutely warm and loving. I never had to ask for anything. As far as I know the other chefs felt the same way.

Q- Are you satisfied with the scoring by the judges of Foodistan? Like as a viewer I feel that they should taste a dish and score it before tasting other chef’s dish? & the thing that bothers the viewer more is why the judges’ award points only like7 or 7.3 or 7.6?

I believe the judges did well in the way they scored. Yes, nobody likes being told that a dish wasn’t as good as it should have been, or might have been, but that’s a competition. And another thing, the level of food being made is not ordinary; we were in our professional element. One eight of a point makes a difference.

Q-Regarding Foodistan you think that Indian and Pakistan cuisines have differences or not?

Q-You think that Masterchef kind of cooking show can be held in Pakistan? The passion of cooking in housewives can be acknowledged through such shows?

I am sure that it can. Homemakers are the true heroines of any society, and they should be honored. And their personal recipes are amazing.

Q- Are you working with any restaurant where people can actually have your kind of fusion food?

I have worked with a few restaurants on recipe development but I think fusion is not ready to be accepted yet. My prime focus with these restaurants is Nouvelle cuisine.

Q- An ingredient you love to work with?

Q-Anything you dislike to cook at all?

Q- The most difficult ingredient to work with?

Q-Any food memory you want to share with us?

I once ate a whole clove of raw garlic as a child because I thought it was an almond. I was very upset! 🙂

Q- Places you recommend to enjoy food you like the most?

In Karachi, I think everyone should go crabbing and eat masala crabs and definitely eat at BBQ tonight. Best tikka in khi! I am a Karachi-ite so will reserve comment on other cities!