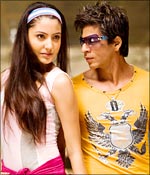 In what is being termed as the biggest hit of 2008, based on its first 10-day box office collection, Shahrukh Khan starrer Rab Ne Bana Di Jodi has managed to collect about Rs 60 crores so far, of which nearly half has come from the overseas markets.

This exceeds earlier successful box office collections for the first 10 days, for films like Singh is Kinng (about Rs 48 crores), Race and Jodhaa Akbar (about Rs 45 crores each) released earlier this year. With Rab Ne, the Yash Raj banner has tasted success after a stint of commercially unsuccessful films like Tashan and Thoda Pyaar Thoda Magic that were released earlier this year.

Also, in its second week of running, Rab Ne managed to collect about Rs 7 crores on its second Sunday, similar to its collections on the first day of its release on December 12, trade experts in Mumbai said.

Experts say that by the time Aamir Khan’s Ghajini is released on December 24, Rab Ne will end up with at least Rs 80 crores of collections. Meanwhile, Ghajini is also releasing about 1200 prints like Rab Ne did, including 300 prints in the overseas markets.

“It is widely anticipated that Ghajini may also do a similar business like Rab Ne. However, till it is released, Rab Ne would have increased its collections beyond Rs 80 crores, a big milestone for a Bollywood release this year,” a Mumbai-based trade analyst said.

According to trade collections, Rab Ne Bana Di Jodi raked in about Rs 17 crores from the first three days alone in the overseas market, including collections in North America (Rs 7 crores), the UK (Rs 2-3 crores) and UAE (Rs 5 crores-plus).