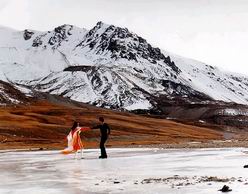 The trend Javed Sheikh started in Yeh Dil Aap Ka Hua is followed by Rashid Khwaja in Salakhain, where Bollywood playback singers Sonu Nigam, Alka Yagnik and Kumar Sanu lend their voices (in their own names) to Lollywood actors. M. Arshad has composed the songs and with the help of lyricists Amjad Islam Amjad, Ayub Khawar, Riaz-ur-Rehman Saghar and Khawaja Pervez, manages to come up with the best filmi album of the year.

Shabnam Majeed’s Tanhayan leaves a lasting impression as a soulful, tragic number. Sonu and Alka render Barish so well that it makes the listener wonder if it is really raining outside. Robin Gosh’s trademark – church bells, accordion, violin and female chorus – are used well by the musician while guitars, flute, violin and whatever that was not being used in Lollywood is brought back to life in this suave number.

Sonu Nigam returns with Naina, undoubtedly M. Arshad’s best work to date. Both the Sonu Nigam numbers were sung by local singer Tauseef Dar, but due to Pakistan – India détente and Mr. Nigam’s presence in Karachi a couple of months back, the songs were re-recorded in his voice while the talented Tauseef Dar was shown the door.