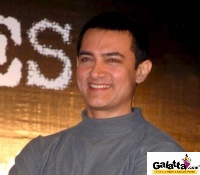 Mumbai: Aamir Khan may not look a day over 34 but the actor celebrated his 44th birthday on March 14 with media at his house in Bandra, Mumbai.

On this occasion Aamir who was recently declared as the most powerful man in the film industry by a leading film magazine reiterated that he was not in the numbers game.

“I have never bothered about numbers. I look for excellence and not success,” says Aamir.

The last year has been especially successful for Aamir. He made his debut as a successful director with Taare Zameen Par and went on to have another big hit as producer with Jaane Tu Ya Jaane Na and finally gave Bollywood its biggest money spinner till date – Ghajini.

But the actor has also been making news for his verbal duel with Shah Rukh Khan and on his birthday Aamir made an attempt to build bridges with King Khan.

“I am very affectionate towards him. I wish he gets all the success,” says Aamir.

Aamir is currently producing three films under his banner – Aamir Khan Productions and as an actor is busy shooting for Rajkumar Hirani’s 3 Idiots opposite Kareena Kapoor.

It is a role which required him to get rid of his eight packs and his muscular toned Ghajini look.

“I am on a diet for 3 Idiots. See I couldn’t even eat my cake properly,” adds Aamir.