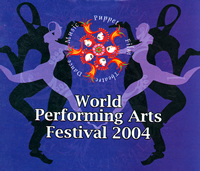 The Uzbek camp in particular was jam-packed with spectators who were completely enthralled by the dance performances. The Uzbek dance titled ‘Sonata’ was the most attractive feature of the festival. The performers, clad in stunning vibrant dresses, had the crowds up on their feet as they executed impressive dance sequences. The audience enthusiastically cheered the dance titled ‘Africa’ and was full of praise for the young performers. The other dance themes ‘Youth of Uzbekistan’, ‘Temple of love’, and ‘ Slow Waltz’ were unique in style and received the same praise from the audience as ‘Africa’ had received.

The Wall Street Theatre gave a rather unexpected performance. The artists with slicked back hair walked onto the stage as perfect gentlemen, neatly dressed in suits, wearing horn-rimmed spectacles and sock suspenders. The thought that the performance would be serious proved wrong as the group delivered one of the most hilarious performances ever seen in Pakistan. The show caught the audience off-guard with its bizarre antics as performers combined dialogue with acrobats to create a witty show.

Ajoka, a local theatre, staged their play ‘Marya Hoya Kuta’. The 50-minute play revolved around the irresponsible attitudes of people and the need for social change. The play was the first ever by writer Shahid Nadeem and was directed by Madeeha Gauhar.

The Indian theatre performed ‘Nipa Rang Mandli’ which was also impressive. The play opened with a comical debate between a saint and his disciple. The two are poised against each other from the very start, as both adopt opposing philosophical points of view.

The Euro Theatre Central Bonn Germany held a performance ‘Raaz and Niaz’. The play was a German adaptation of original romantic comedy ‘Raaz au Niaaz’ by Rafi Peer. Yasmina Chehil performed the character ‘Raaz’ and Andrea Kunz performed ‘Niaaz’. Set on a houseboat at a river in the Kashmir valley, the writer Niaaz surprises the young Raaz when he steals a letter. There is an enigmatic aura about Raaz and the play kicked off with Niaaz trying his best to extract the letters from the mischievous yet strong-willed Raaz in the most chivalrous and charming manner. The play revolves around the chemistry that subtly develops between the two through a volley of witty repartee and mischief. The unconventional aspect was the manner in which a local play with its eastern setting and get-up was performed with a strong foreign element. The play was presented with natural and spontaneous humour, but in some places it was evident that the foreign performers could not relate to the eastern concepts of romance.

The festival also featured plays such as ‘Puppet’ by Farooq Qaiser, ‘Folk Night’, and two plays by the Rafi Peer Theatre, ‘Patay Khan’ and ‘Magic Paint Brush’. Sumaira Malik, the state minister for Tourism, was also present at the shows.