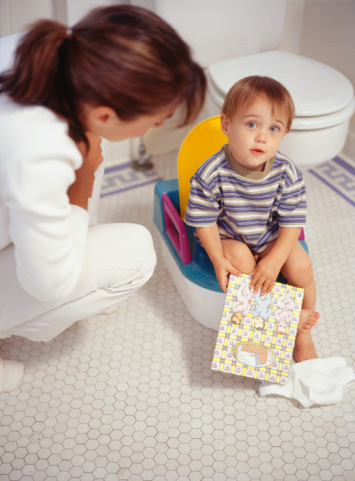 First, some perspective for frazzled parents: Every healthy child is successfully potty trained. In the long run, the age at which she masters these particular skills doesn’t matter. It’s not a reflection of your skills as a parent or your love for her. Doing it earlier doesn’t mean she’s smarter or more coordinated or will get into an Ivy League school.

But if you start potty training before your child is biologically and emotionally ready, you’re both going to become frustrated and upset. It will also drag out the process because it’s likely to turn into a battle of wills-a battle that parents never win. That’s why it’s a good idea to know the signs that she’s probably going to be successful before you start.

Most children become potty trained between 18 and 30 months. However, some children still struggle with the skills when they’re 4 years old. But if you look closely, your child will tell you with her behavior that she’s probably ready to begin. For example:

If your child shows most of these behaviors, she may be ready to begin. We can help you with some ways to start