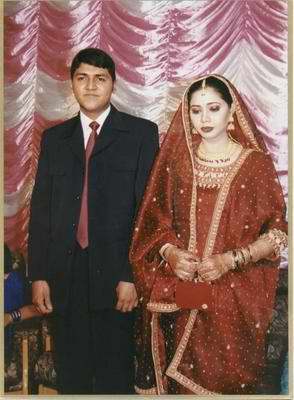 A few months back I had an opportunity to visit an engagement ceremony of one of my male class-fellows who is now engaged to a junior student who was in the same institute where we all were studying. The engagement took place when we, as the senior batch graduated successfully and the parents of both sides decided to tie the knot at an engagement ceremony, which is a good trend that people are nowadays marrying or at least engaging their sons earlier. Since men are usually getting married in late twenties or early thirties these days.

The arrangement made by the bride’s family was really huge and superb. The bride was wearing maroon red lehnga and short shirt with golden embroidery on her dupatta and lehnga. Her hands were full of beautiful designs of henna (mehndi) and she was wearing heavy gold and diamond jewelry.

The groom came with his family, friends and relatives pretty late. But this is the usual trend in Karachi that usually the groom comes very late. The groom was wearing three piece suits and was looking very elegant.

After their arrival, we all friends and the cousins of bride and groom sat together in two opposite parties of bride and groom and sang songs of mehndi for almost an hour. We all yelled and hooted each other tried to defeat one another. Since there were less people with weak voices from the bride’s side compared to the groom’s band so we all friends had to sit with them but still we lost the mehndi singing competition.

Then the engagement ceremony began. In most of the engagement ceremonies of Pakistan, the groom comes with his family, relatives and friends at the bride’s place and ties the knot by putting on the engagement ring into the bride’s finger of right-hand. The bride then also puts the ring made especially for the groom on his finger. The basic purpose of this ceremony is to show and tell the people that the girl and boy are now tied together verbally and would be married very soon. So the same tradition was followed by my friend and his to-be-bride’s family.