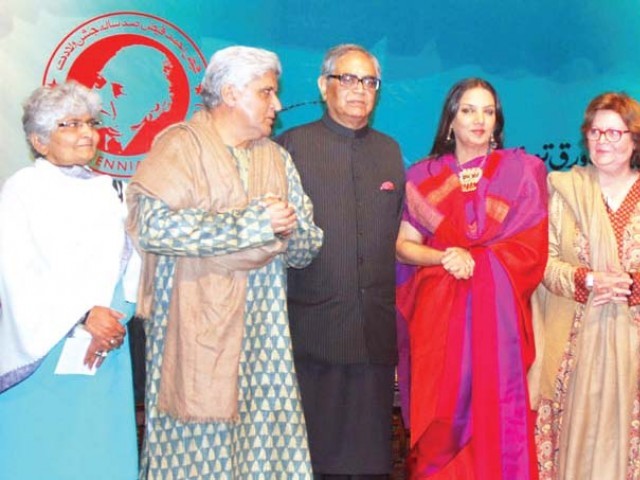 Poetry tells the truth and that too in a subtle, dignified and befitting way. The feelings that need countless words to be expressed are sometimes told in a single verse in a unique way.This is what writer and poet Javed Akhtar practically demonstrated when he crossed the Pakistan-India border on … Read more

It was time for some quality time with the family on the sets of Indian Idol. Not only did the contestants get a chance to meet their loved ones, but Javed Akhtar also got ‘lucky by chance’. His children, Farhan and Zoya, joined him on the judges’ table for the … Read more

New Delhi (IANS): Writer-poet Javed Akhtar, who usually shies away from breaking into dance and song, will now be seen doing the bhangra on the small screen to celebrate son Farhan’s birthday on Friday. Javed paid a surprise visit on Farhan’s show ‘Oye! It’s Friday!’ and spoke about his son’s … Read more

For two days now, the city of Mumbai has been subject to a kind of violence more real and shocking than anything that its film industry could ever show onscreen. No wonder that Bollywood is still trying to come to terms with the terror in its backyard. Lyricist Javed Akhtar … Read more

In the Ice Candy Man, written in the backdrop of 1947’s Partition, Bapsi Sidhwa wrote: “And the gramophones and speakers mounted on tongas and lorries scratchily, endlessly pouring out the melody of Noor Jehan’s popular film song that is now so strangely apt,” Mere bachpan ke sathi mujhe bhool na … Read more

Zubeidaa’s all-star cast for both screen and soundtrack brings together some of the biggest names in modern day Indian entertainment. THIS is the tragic story of a princess (Karisma Kapoor in the title role), narrated through the eyes of Riyaz, the son who never knew her. Directed by 66 year … Read more